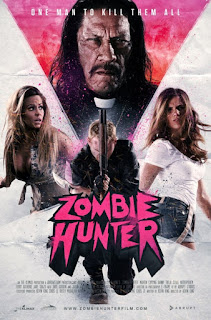 Zombies exist because of a drug called "natas" (Satan backwards if you didn't notice that).  We find this out because of the polite stripper-looking news anchor on channel 44.    After a very long vomit scene with her co-anchor, which the news camera films all of in close-up, we're given this filler-ish backstory about things revolving around some drug users.  The only redeeming part of this scene is that they made a fake Blek Le Rat graffiti piece in the background.

From there we get introduced to our Australian actor, driving a souped up black sports car, and wearing a leather jacket.  Known only as "Hunter," this is our main character.  Not Danny Trejo, who is on the fucking poster, but this guy.  For the remainder of this post Mr. Trejo will be referred to as Dubstep Trejo in regards to his action scenes having absurd dubstep playing over them.  He has maybe three scenes at most in this film before he gets his head ripped off.  Two of those scenes have Dubstep Trejo shirtless and swinging a full sized wood axe to kill zombies.  That man is fucking rad and money well spent.  For real, I love Mr. Trejo in films.

There isn't much plot to describe from here on out: Hunter meets our tropes; Hunter and the tropes attempt to escape; people get picked off by either zombies, super zombies that look like a mix of the Tyrant from the Resident Evil 1 game and Nemesis from the Resident Evil 3 game, or the crazy giant guy with clown paint and a chainsaw (whoop whoop); nice girl and her 20-teen brother are the sole survivors.

The only one of my notes I haven't touched on here are just the words "stripper magic!"  I don't remember what this was referring to, but strippers are indeed magical...  Actually, I shouldn't say stripper.  As an acquaintance once referred to his occupation, they are "fantasy technicians."

On that educational note, I give Zombie Hunter two Danny Trejo tattoos out of five.