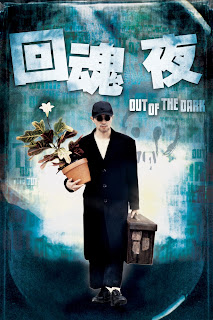 I've stated it before, and I'll state it again: I fucking love Troma films.  And while China is a long way from New Jersey, 1995's Out of the Dark is probably the closest thing to a non-Troma Troma film I've seen.  Kudos to you China!

Our primary location is an apartment complex where an older woman died, apparently via shady means.  Her ghost begins possessing a small child and then other individuals in the building.  Enter character number two (after the ghost, not the child) in a teenage punk-ish girl.  She does the best "I'm gonna air guitar and head bang but not know what the fuck I'm doing" scene with our main character.  On that note, our main character is referred to as a "ghostbuster" throughout the film but is really just an escaped mental patient that apparently knows how to deal with the supernatural.  Throw in some bumbling cops/security and you've got yourself a film.

Much like Troma films there are a lot of sexual and borderline offensive moments mixed in with cheesy exaggerated humor.  Honestly though, I have a second tab open on my browser right now to see how much a copy is from Amazon (spoilers: the blu-ray new is $61 and the DVDs are region locked).  I'm not saying this is the best film ever, but as far as my tastes go, I thought it was fantastic for what it was.

I give Out of the Dark 4 potted plants out of 5: