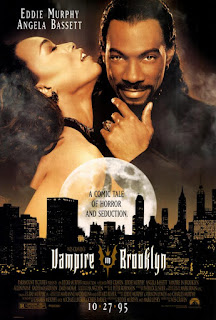 As a kid I thought this movie was okay.  I'm sure I initially watched it on the USA network or something random like that, but as an adult I wasn't sure this would hold up.  Now, I'm very much a white guy, but like most rural/suburb white kids I grew up watching stuff like Martin, In Living Color, Living Single, and really liking those shows.  They don't hold up well now because I could fake identify with them then, but living in cities for my adult life has made me not relate to them at all... plus Fire Marshall Bill is pretty fucking dumb.

So with adolescent flashbacks out of the way, I was fucking floored when Wes Craven came up as the directing credit for this!  Most of the time everyone thinks of Nightmare on Elm Street or Scream, but never fucking Vampire In Brooklyn!  The more surprising thing is that this is meant to be more of an "urban" horror film, and it pulls it off well for the mid-90's.  I will say that the characters are a bit stereotypical, and while I love John Witherspoon, the man only has one fucking character he plays in every film.

What we get with Vampire In Brooklyn is a good backstory of vampires originating in Egypt, but later being scattered to Eastern Europe and even the New World.  That I can buy.  Eddie Murphy's accent as a vampire... not so much.  We get a typical vampire movie plot of he wants a specific girl and does everything in his power to get her.  Rather than a Renfield we get Kadeem Hardison becoming Eddie's "ghoul" and rotting/falling apart the whole time.  He's no Tom Waits, I'll tell you that... but it's also how the character is written in this.

I was behind Eddie Murphy in this film until, as my notes so masterfully describe, "Fuck Eddie Murphy dog exploder," and "Killed a cat."  Yeah, at one point Eddie looks at a police dog and sparks appear under the dog as he shoots into the air and dies in water some 50-yards away.  He also disguises himself as a shitty ganster wanna be and shoots a cat.  It's weird.  Chainsaw people in half, torture them, make them eat their own butt raw, whatever; I'm fine with that.  You "kill" an animal and you're instantly a scumfuck.  Maybe I'm the real monster after all...

So bringing it back to did this film hold up?  Sure, it was actually still good. If I were going to recommend an urban horror film though, this wouldn't be the top on my list.  That goes to Bones.  Honestly, Snoop and that crew did a good job of making a modern version of classic Italian horror... urban classic Italian horror?  urban horror Italian classic?  Unlimited salad and bread sticks?

I give Vampire In Brooklyn 3 copies of Delirious out of 5: