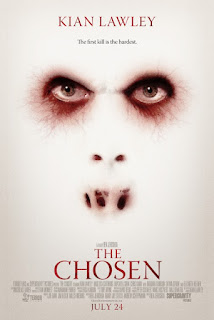 There are a lot of really weird and cool things that come out of Abrahamic religions.  One of the most common you come across is Lilith, the first wife of Adam.  She was made of the same clay as Adam and was a much more independent individual.  The story goes that Lilith turned down Adam's sexual advances.  Adam, jilted and angry, turned to God and complained that Lilith would not do what he wanted.  God cast Lilith out of the garden and cursed her barren.  God then took the rib from Adam and created Eve.  The rib was used this time because it was a part of Adam and thus Adam would have a better control of Eve.  From here Lilith's story gets random.  To some, she becomes a vampire and feeds on or kills infants.  She also becomes Fraser's wife.  In this film she makes a pact with Lucifer and possesses children.  If a blood relative doesn't draw a blood sigil on six other blood relatives for Eve to take in the child's place.

And that's the plot of 2015's The Chosen.  An early 20's something uncle spends his time trying to save his niece from Lilith.  Luckily he has two elderly people living in the house, a bitch of an aunt that shows up, his mom (who confesses that she killed the young girl's twin brother three years ago), and a drunken asshole of an uncle living in the house.  That's only five you say.  C'mon, you know who the 6th person ends up being...

This film was slow as hell.  Even when there was action it felt like it was slow.  A ghost nun that wrote the weird book on Lilith our main guy ends up with shows up a few times and is kind of cool.  Otherwise, this movie was a good plot but a boring execution.  The Chosen was only rated PG, and that was its nail in the coffin.  If it were a solid R they could've made this pretty awesome.  I mean, the fact I spit out a bunch of esoteric knowledge on Lilith and that's longer than my review portion of this film should mean a lot.

I give The Chosen 1 Lilith statue out of 5: