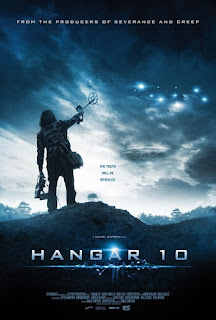 This movie was The Blair Witch Project with the military and aliens instead of a witch.  That's it.  "Found" footage, getting lost in the woods, weird events, losing one of your members and finding them in the place where the big bad is; it's all there.  The only thing that was kind of interesting was the military helicopter doing sick air burnouts before it explodes and crashes.

I'm not wasting time writing more because I checked the fuck out mid-way through this movie and it just became background noise.

Hangar 10 gets 0 stupid alien clipart pics out of 5: 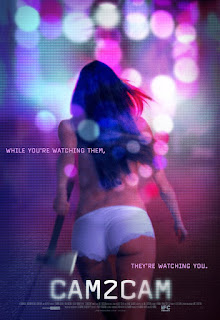 If this film had balls I would fucking punt them sooooo hard just because I wouldn't want it to spawn any offspring.  Having that image firmly planted in your mind, know that this wasn't the worst film I've ever seen.  I just disliked it so much that I want to cause permanent bodily damage to it in order to preserve hope for our future.

Here's the rundown: An American girl, in Bangkok, thinks she's having webcam hanky panky with another female friend.  She realizes that something is up and then the person on the other end comes to her place, kills her, and cuts off her head.  Enter her sister coming to basically find her sister's head and what happened to her.  There's a series of bullshit and fake murder that leads her to find out that a group of people in the same apartment building as her sister.  They were doing some webcam hack/scam type deal and one of them took it too far and became a serial killer.  This guy gets killed half way through the damn movie by jumping in front of a truck.  The rest is just the lame unraveling of what happened, who was involved, and a bunch of severed lady heads underwater.  It's not worth explaining the actually workings of this plot or film.

The director of this film has some terrible back credits.  It's mostly sequels of sequels of horror movies past their prime.  In fact, the only thing he did I give a shit about was being a producer on Bill and Ted's Excellent Adventure.  Back to this bogus shit stain though, there is an over abundance of forced lesbianism in this film and it feels injected into the story.  It has the sense of "we're an independent film and this is artsy" pretentiousness to it.  Also, the chat language in this was absolute bullshit.  Nobdy typs lke this 4 n ntre cnvrsatn.  It's old people trying to be hip on what the kids do, even though these people are in their 20's and probably type like normal adults.

I felt like I was being dragged through this entire film.  The only smart line of dialogue was the one guy telling the sister "you traveled across the fucking planet for a head," which is true.  She's an idiot and your closure is bullshit.  Although, she got a box at the end of the film that I'm pretty sure was her sister's fish gnawed skull.  Fuck it.

I give Cam2Cam zero.  It doesn't even warrant me finding some image and making a rating scale for it.  It just gets a fucking zero.
Posted by J. Cimba at 12:50 AM No comments: 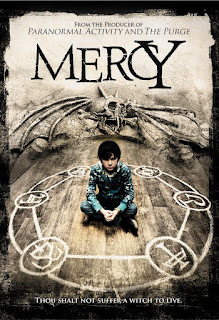 Finally, 30 Days of Plight has come back to the United States for 2014's Mercy.  I feel like at this point in my life I should know that when I see either A) a star-studded cast, or B) "based on a work by Stephen King," then great fuckery is afoot.  Also, why is Mark Duplass seemingly cast as a creep and/or jerk so much?  Is it typecasting for how he is in real life?  I want to think Mark Duplass is a cool guy in real life. #Iwanttobelieve

Mercy is based off the Stephen King short story "Gramma" which I have never read.  Although, it's now added to my list of things that I say I kind of want to read but probably never will if I'm being honest with myself.  This movie starts out pretty strong with a man walking into a room with an axe, spinning it around in his hand, and promptly splitting his own skull with it, all in front of his wife.  This movie could have ended here and I would sing it's accolades from the highest of mountain tops.  Too bad there was still another hour and 17 minutes to go.

Our main character is George (Chandler Riggs of The Walking Dead fame and "hey Carl" memes).  His grandmother has a seizure and is put in a home.  Then, a year later, she has a stroke and George and his brother and mother return to fake West Virginia to take care of their ailing family member.  We meet George's creepy asshole uncle (Mark Duplass) and this married friend of George's mom that both George and his brother state they have no problem if this dude (Dylan McDermott) and their mom banged.  I feel like Dylan McDermott hasn't changed his look since the first season of American Horror Story and everyone is afraid to tell him to with each passing film.  To pull this back to the film, the long and short of it is that the in her youth the grandmother found this made-up witchcraft item known as a "weeping book" where if you cry on the pages while thinking of your wish it will make the ink appear.  She made some agreement with a demon named Hastur and had triplets.  The beginning scene with the axe was her and her husband.  Now Hastur has come to apparently try to use her body to possess George.  I'm kind of confused on the whole Hastur thing here, especially since I know that name from the Cthulhu mythos, and when they show him he looks nothing like the rad drawing of him they showed earlier.  He looks more like a dark variant of Moss-Man from the He-Man toys.  George defeats Hatsur by being brave and crying on the book while stating that he loved his grandma.  For real, the big "saves the day" thing is that weak.

Mercy was very good visually and talent wise, but I feel that the storytelling of it could have been done much better.  What it lacked in substance it tried to make up for with suspense-by-omission.  In this case it came off as poor writing, at least to me.  I can't really damn this film just because I didn't really like it all that much, but technically I can as this is a horror film review blog... so, suck it, Mercy!

I give Mercy 1 Dylan McDermott ass shot out of 5: 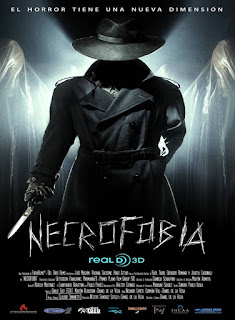 This movie wasn't really horror in a new dimension.  It's more of a horror/thriller in a dimension of things I've seen done before, just in Spanish! Think Fight Club, but instead of fighting it's a man having a nervous breakdown... AND MURDER! MUAHAHAHAHA!

Our guy, Dante, found his brother dead of an overdose.  From there he spirals into this odd mixture of time anomalies and dealing with a man in a black coat and hat he thinks is his dead brother.  During the course of this film Dante's (separated) wife is murdered and this sets the deaths in motion.  Dante runs around like an ass and eventually has a real confrontation with the man in black.  It's actually a part of him buried inside (not surprised) and the film pretty much starts over with him in the know.

This film isn't really worth watching.  It wasn't bad.  It just wasn't that interesting.  I can't even make jokes because this shit was just bland.  Fuckin' mayo on white bread boring.

I give Necrophobia 0 pairs of Guy Fieri looking scissors out of 5: 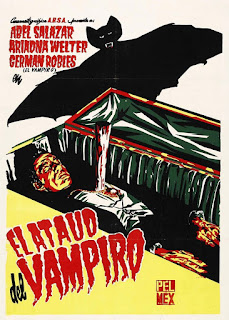 With our feet planted firmly on the soil of this Mexican vampire movie, we're back for our third cut!  Also, much like our previous reviews, we ended up getting what I'm assuming is a sequel to the 1957 Mexican vampire film "The Vampire," and if not the story telling is really fucked up.

The quick sum up is this:  A doctor and his girlfriend/wife apparently encountered a vampire while on a vacation that is only spoken about in this film.  She is under her boyfriend/husband's care at the laziest hospital I've ever seen.  Another doctor our hero works with is studying something to do with skin mutations (I can't remember) and hires a goon to go steal the body of the vampire from his tomb so it can be studied.  The goon sees the token vampire amulet on our vampire and sneaks back in to steal it, but in doing so he has to remove the stake.  This brings the vampire back to life (stick with me here...no pun intended) and the vampire hypnotizes the goon to become his man servant in what I assumed was going to become more homoerotic but I'm glad it didn't.  Our vampire finds the girlfriend/wife and keeps trying to put her under his power.  The whole thing leads up to a face off in the shittiest wax museum in the history of forever and the vampire gets speared to a wall.

That wasn't as quick as it could have been.

Overall, this film was a mess.  Being in black and white meant that a lot of the on screen acting was "stage acting" with over dramatic facial expressions by characters not speaking.  Also, they had the effect where the vampire faded away multiple times, but rather than use that each time they chose the turn the camera off, get into place, turn it back on method more often.  The bat was a rubber bat on wires, which I'm fine with, but they would play seagull noises the entire time the bat flew.  There's also a scene where the vampire changes directions in his coffin.

Worst of all though is the broken lore they try to pull with the vampire's reflection.  Every time they show the vampire in a mirror you just see his skeleton.  My fiancé tried to rationalize this point to me by saying that maybe it was showing his current form, since each time he was "dead" in the coffin.  It gets explained to us though as the UV light doesn't reflect off the skin so it doesn't have a reflection... but his bones do?  I feel like this person watched Dracula once, but then tried to remember how the vampire worked in that film and filled in the gaps with gibberish.  GIBBERISH I SAY!

I give The Vampire's Coffin 1 tacky vampire medal out of 5: