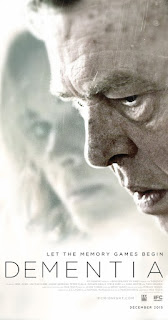 I have a little game I play with myself anytime I watch a horror movie.  It's "can I figure out who the bad guy is before the reveal?"  The problem with playing that while watching Dementia is that you find out that everyone is absolute trash in this film!

So here's a rundown on why everyone is trash:

War vet - he was in a P.O.W. camp and tortured because a member of his platoon gave them up.  He was angry the wife of that man was granted her husband's purple heart upon death so he possibly sexually assaulted but definitely killed her.  Her daughter saw him from a hiding place.  He was also one of those drunk and abusive husbands after returning from the war.

"Nurse" - Not a real nurse, the daughter of the mother and traitor soldier, dedicated her life to finding this guy and getting revenge.  Also killed the vet's cat and blamed it on him.  He should've extracted revenge on her for the death of his cat there and saved us the rest of the film..

granddaughter - stealing from her grandfather's house but also realizes the nurse isn't what she seems.

son - doesn't trust his dad because of the father's past abusive actions.  Seems to just want to push him off on someone else so he doesn't have to deal with him.  Lots of unresolved anger and resentment issues with his father.

This wasn't anything new at its core.  This was the first film in this run that I've definitely considered shutting it off and chalking it up as crap.  I let it go as if it would maybe get better, and it definitely didn't.

I give Dementia 0 trash bags out of 5: