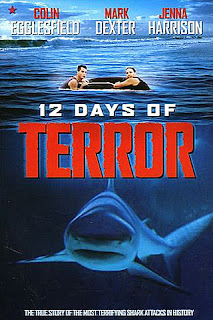 You know what was an awesome and under appreciated TV show?  Sliders.  It was one of Jerry O'Connell's great TV works before his acting career took off (aside from My Secret Identity, and not counting Stand By Me).  He isn't in this movie, but John Rhys-Davies who played Arturo is in it!

Speaking of TV, 2004's 12 Days of Terror was a made for TV movie about a shark attack on the Jersey Shore in 1916.  Think of it as old-timey Jaws with less of a budget... and a worse script... and some take-it-or-leave-it acting.  I'm personally to the point where I wish I could go back in time to see how people acted in certain time periods.  This film made everything seem so forced to be from 1916.

There wasn't even 12 solid days of terror, I think there were two shark attacks and then 12 days later some other ones.  This movie also pushes the idea that it was a baby great white that did the attacks but apparently the real shark or sharks were never identified.

Someone on IMDB reviewed this movie and said that it should be Oscar worthy.  I feel more like it's bad, but not even bad enough for a Razzie.  That makes it the worst kind of movie.  Where you can't have fun with it, but you can't enjoy it either.