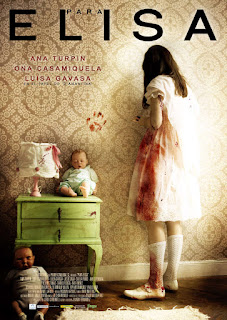 Have you ever heard the Patton Oswalt bit about his TiVO?  I feel that way with some of the movies Netflix puts in their horror listing when I'm counting to the number I rolled.  It seems that since I enjoyed some of the foreign horror films I've watched on this blog that Netflix has the idea that I must like all foreign horror.  "But you like the horsee shows! NO TiVO! BAD TiVO!"  Bad Netflix!

Para Elisa comes to us from Spain and revolves around a spoiled shit of a college girl whose mom won't lend her 1000 Euros for a trip with her friends because the mother had just paid for her to take a trip to London.  Her drug dealer boyfriend sees a poster for a babysitting job, calls the number, and hands her the phone.  She eventually goes to find out that the girl she is supposed to baby sit is a grown ass woman that the mother has completely fucked up in the head.  After being drugged, our leading lady wakes up to realize that she is not meant to babysit, but to become a living doll for the daughter to play house with.

This movie wasn't for a horror fan.  This is more for the vanilla movie watcher that wanted to watch something scary.  Yes, the premise is kind of fucked up and the mother/daughter relationship is bizarre but it really didn't keep me invested in the film.  In addition, a leading character that I instantly did not like (as obvious above) really gave me no one to root for.  Plus, you see the ending coming way to early.  I know that's a constant complaint I bring up on here, but I want to be surprised.  Just once.

I give Para Elisa 1 creepy doll out of 5: