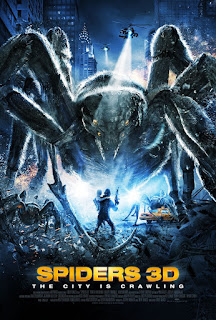 I recently completed a playthrough of the 2016 version of Doom.  Being a fan of the original two (and kind of liking the 3rd... kind of) I knew exactly what I was expecting.  Imps, Pinkys, all sorts of hell demons.  You know how it works.  So why am I bringing up a video game on my horror film blog?  It's because as I approached the final level I knew exactly what boss I'd be facing: The Spider Mastermind!  A giant cyber demon spider monster that was brought to mind by the "queen" spider in this film.

Spiders (or Spiders 3D if you watch that shit in the third dimension) is one of those horror movies that seems like it wants to be a good film, but if it embraced the cheese factor of it then it could be amazing.  Our plot runs as thus: the former U.S.S.R. had a space station with these creatures that just happen to look like spiders on it.  A part of the space station crashes from space and into the NY subway.  Eventually the military is brought in as well as a Russian scientist that was working on the project and they begin collecting the spiders to continue with the original plan.  We're stuck with an upper level subway security person and his ex-wife/current public health doctor/scientist/Shannon Dorhety impersonator.  So space spiders escape, and giant queen spider attacks the city... etc. etc.

There were shots in this film that reminded me of Them! or The Giant Gila Monster and I wish that they would have gone down that road.  Like I said above, as a cheesy movie this would've been great and adding a camp factor on purpose would make it fun.  They didn't though, and instead blew an estimated $7 million on trying to make a polished turd.

I give Spiders/Spiders 3D 2 Queen Elizabeth I paintings out of 5: