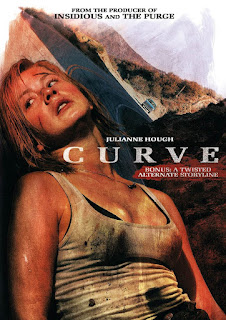 I like to research and learn about things.  The down side to this is that sometimes you find out things that are kind of disappointing.  For starters, 2015's Curve shows no box office return, which means this went straight to DVD.  Digging even further (possibly digging my own grave) I found out that this movie was green lit in 2007, and during that time had two previous leads cast.  What happened to them?  No clue, but it took eight years for this to come out... it probably should've stayed locked up somewhere.

The Curve really comes across as two films in one.  Our main character is in the process of moving to be with her fiancé and has some car trouble.  A sexy hitchhiker shows up and fixes her car so she offers him a ride.  It seems like she's gonna hook up with him and starts to drive to a motel when he starts saying gross stuff about his huge dick.  It ends up he's a scumbag creeper and is going to kidnap and possibly sexually assault her.  In an attempt at survival the girl drives her SUV straight through a curve and off a cliff.  She gets trapped and he ends up taunting her on and off during days of her being stuck.  Apparently when he isn't there he's been at a cabin murdering and torturing some family.

I think that this film probably had the main plot of her being trapped in the car but they weren't sure how to make it work.  Enter the creeper.  Overall I wish he wasn't in it.  His scenes pretty much ruined the movie.  Not that this movie was great to begin with.  There are also a lot of leaps of logic.  The only part I got really excited for was when she woke up to a bunch of rats in the car and I was hoping she'd start singing and it'd be like some fucked up Cinderella type deal where they would free her and kill the scumbag.

Needless to say, that didn't happen.

I give Curve 1 curves ahead road sign out of 5: