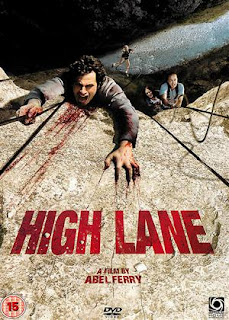 I had a realization while watching this film.  You know what would make a great horror movie?  To just have these continuous moments of suspense and fear, but then everyone survives.  It would be along the lines of Hitchcock but just no Norman Bates on the other side of the shower curtain.  Just a thought, mainly because I feel like if someone made this idea it would suck.

The French film High Lane started by making me feel like it might just be a sense of survival against shitty odds.  A group of people attempt to go mountain climbing but find the path has been closed.  Being a bunch of idiots they attempt it anyway which leads to a lot of close calls up until they find some weird insane guy, that only screams, on a mountain top.  Anton the insane keeps trying to kill them.  Everyone dies.  I feel no remorse for any of them.

As with a lot of horror films, High Lane seems like they had an idea to start with (the mountain climbing) and reached a point where they realized they couldn't make it into a full film and threw in the insane guy.  I was so disappointed by this film I actually watched another one after it in hopes of it being a pallet cleanser...

I give High Lane 1 mountain climbing clip out of 5: