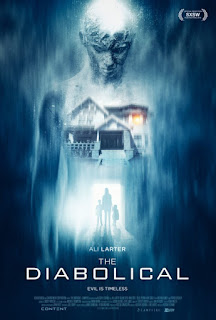 The funny thing about rolling dice to pick what movie I'm going to watch is that sometimes you get something good, and sometimes you come up craps.  After watching the movie I previously reviewed (High Lane) I was hoping to get a decent pallet cleanser.  This time, lady luck was on my side.

The Diabolical focuses on a single mom and her two children.  An entity of some sort randomly appears in their home and causes all kinds of fear and havoc.  One of the kids believes that it might be the spirit of their deceased father.  Over time more and more of the plot unravels including a laboratory that wants to buy/threatens to foreclose on their home and someone close to them is tied in as well.  I'm not going to plot heavy on this one because aside from the sci-fi section at the end, this movie was pretty good.

A lot of the visual effects were great.  The figure that keeps appearing through the house looks frightening as fuck.  There's an early scene where we first see him and there's just a featureless face that he suddenly rips into and tears a film away to show the real face underneath.  It went from "Oh, that guy is rad looking," to "holy fuck!" that fast.  Every time he appears in his grotesque form it's always a good creep out.  My personal favorite being the one involving the dryer.

The "twist" part of the ending you see coming a little bit before the reveal if you know what to look for.  Also, as I said above, the sci-fi tie in element toward the end elicits more of a groan than a gasp.  Overall, the whole is greater than the sum of its parts, so I do recommend The Diabolical.

I give The Diabolical a solid 3 fake ghost photos out of 5: