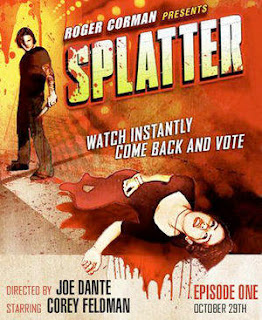 I feel like Netflix was fucking with me on this one.  When I saw a 29 minute running time and Corey Feldman's face I assumed this was some sort of short film.  Nothing against Mr. Feldman, as he has been in many movies I like, but he hasn't been horror relevant since the first Lost Boys film (and this includes the late addition sequels they made where he did a reprise of his Edgar Frog role).

Splatter was a web series created for Netflix.  It was meant to be an interactive show where the next person killed would be chosen by the viewers.  I assume that what I watched was either the pilot or maybe the first episode as almost everyone was killed during it.

It starts with Corey Feldman's character Johnny Splatter committing suicide on camera after spouting a fake vodou spell.  Five people from his career then show up for his wake (I'm not sure what it is, maybe a shitty funeral at night).  These people are his two former band mates, his manager, his producer, and a groupie.  The whole thing is filmed at what I'm pretty sure was the castle house from a season of Flavor of Love.  A video of the suicide shows up but then runs in reverse to where Corey Feldman is telling them his will.

I don't get the video segments.  We see Corey in person and he's a zombie but on the videos he's normal and the videos correspond in relation to events and deaths that happen just seconds before.  So I have no clue what the time logic is here or if he just had his revenge planned this tightly.

After the first death our cast finds a journal in the empty coffin.  It's written entirely in a different language, but don't worry!  The groupie spent time in an African country and she "picks up dialects quickly," so she can read it.  Yes, the logic is that she can pick up spoken languages quickly and can therefore read this journal.  Fuck this character.  She should have died first... preferably on the way to the wake/funeral.

The journal contains a ritual to stop Johnny; body parts from those murdered, collected and burned while an incantation is done.  Come the end there is only one person still alive is, Johnny's manager.  Bee tee dubbs, his fucking manager is CANDYMAN!  Of course not in the role of Candyman, but still the same actor.  He starts the ritual but rather than finishing it he and Johnny make a deal to do a comeback tour.  As a fuckin' nasty zombie, Johnny Splatter reunion tour.  Also Johnny brings his murdered bassist back to life because he needs a bassist.

You know, I kind of thought this was goofy fun when I watched it, but recounting this pilot (or whatever) has made me kind of angry at it.  Also, there were no other episodes of it on Netflix which is what confused me to begin with.  IMDB says there were 10 episodes but apparently only three aired.  They probably got pissed like me after telling someone about it and realized it wasn't as good as they initially thought.

I give Splatter 2 sweet Frog Brothers shirt designs out of 5: