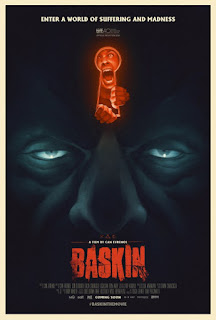 There are times in life where you will make horrible mistakes.  While not my worst mistake, writing this film off early was certainly a lack in judgement on my part.  What started off as a slow crawl turned into one of the most insane things I've ever watched.  It's the kind of horror that is in line with the Silent Hill video games where things are so grotesque and twisted you're not sure exactly what you're looking at.

Based off of the short film bearing the same title, the Turkish film Baskin (which translates to "police raid") focuses on what becomes the most surreal night for a group of police officers.  After acting more like a biker gang than cops at a late night restaurant, they receive a call for back-up at a location not far from them.  Along the way a series of strange occurrences happen, such as seeing a naked man run past and something unseen hitting their van and leaving symbols scratched in it.  Then their van hits a bloody man in the road and veers into a deep creek.

This is where we have the first of many dream realm scenes between the rookie and the "boss" of the officers.  We also find that they both see a cloaked man just beyond the door of the room these scenes exist in.  The rookie is pulled from the water and we briefly meet a group of Romani that give them directions to the site they were called to.  This is the point where things began to descend into madness and I became hyper focused on Baskin.

They arrive at a large building to find a single cop inside hitting his head off of a wall.  After he points to a door our cops decide to split up.  Then they enter Hell.  Literally.  As soon as I finished this film I begin extensively looking things up on it.  They don't enter a Dante's Inferno hell, or a fire and brimstone hell, but rather a cultish human-extremes version of hell.  It's an overly sexualized, bloody, grotesque, absolutely insane portrayal of hell.  To top it all off, their leader was this guy: 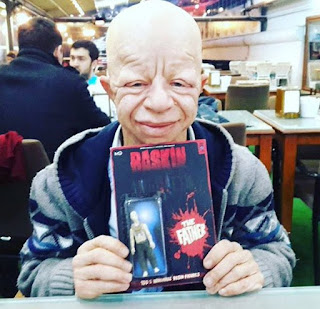