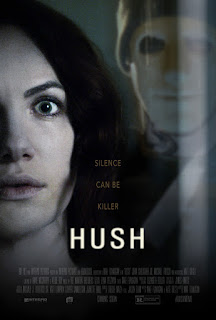 Hush's plot is a relatively simple one with a well played twist.  Our main character is Maddie, an author who happens to be deaf and she is trying to survive some psycho that is attempting to break into her house.  The fact that the killer has the ability to move around and sneak up on Maddie leads to some tense visuals and experiences with his character.  They also don't over inundate you with Maddie's disadvantage and balance out the film by making it very dark.  This lack of lighting during Hush, at least to me, made me feel that the loss of sight was a greater issue to deal with than the lack of hearing.

I'll admit that this movie felt a bit slow at first.  There are characters introduced in name or picture only that are never brought into the film, but at least give you a stronger emotional connection with Maddie.  This helped me a lot with getting into Hush.  I don't know if other people do this, but sometimes in these films when something happens and the protagonist gets the advantage I get excited and yell "YES!" at the TV as if the Pens have just scored an overtime goal to go to the Stanley Cup.  I did that twice during Hush.  I'm sure my neighbors thought I was having some sort of weird angry orgasm.

I give Hush 5 pictures of the cat from this movie out of 5: