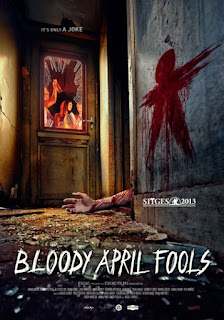 The issue you sometimes face with a film from another country is that some things will get lost in translation.  For example, Los Inocentes translates to "the innocents," not Bloody April Fools.  What also doesn't translate well is that while the North American "fool's day" happens to be April 1st, Spain's (which is where this film is from) takes place on December 28th.  So this leads to my big "what the fuck" moment of why is the U.S. release of this film called this?

Bloody April Fools starts off as any good slasher would: the quiet nerdy boy is accidentally murdered during a prank by some jock assholes at a hostel.  On the anniversary of his death (Fool's Day/December 28th) people at this hostel would end up murdered.  The hostel is then closed and said to be cursed.  Enter our group of late teen/early 20-somethings that are lost and decide to stay at the abandoned hostel despite some warnings from the locals.  Much blood and death ensue as well as some Jean-Ralphio looking asshole playing dumb pranks until his death.

Overall, Bloody April Fools did nothing new or original.  While I was having a bit of issue figuring out who the killer was, by the end of the film I realized they were just placing the original Friday the 13th in a hostel instead of a summer camp.  The actors were all on point but their characters were the standard tropes (minus a token) and, even the ones we are supposed to cheer for, I couldn't be bothered to give a fuck about.  The ending makes sense for the Spanish title at least.  I'm still kind of pissed this movie is called Bloody April Fools here.  Also, as another point of griping, I'm pretty sure that nail gun needed to be hooked up to a compressor and is not just a "I'm going to walk around with this shit and shoot 10" nails" type.

I give Bloody April Fools (Los Inocentes) 0 pictures of people enjoying a hostel responsibly out of 5: