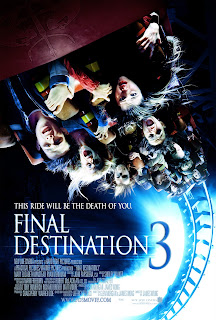 Note to self:
Here is a list of things to never do:

Surprisingly I've managed to live a long and fruitful life without having seen a single one of the Final Destination films.  Even without having seen them, I knew that the premise would be this:  A group of teens/young adults survive a horrific tragedy by exiting or getting off whatever is supposed to kill them (in this case, a roller coaster).  After that they die one by one.  I want to say something dramatic and metal here like "because death comes to claim them for escaping his icy grasp!" but there was no image of the Grim Reaper to be found and I really wanted a giant skull face to show up at some point.

I will say that this movie has some great gore kills.  Color me impressed (or crimson) because I really didn't think these would be as bloody or gut filled, but I guess it's a good way to keep people engaged.  The CGI felt a bit excessive at times, although I might just be splitting hairs since this movie is 10 years old and that's like saying Frankenstein sucks because it isn't in color.  Frankenstein doesn't suck for the record.  It's pretty great and set a lot of the standards that we see in monster movies.

Frankenstein aside, I actually think I might watch the rest of this series at some point.  My only concern is that he first film will feel like they were trying super hard to make a great movie as opposed to bad/good gore fun that I assume the others could be.  I just hope there's such great lines as "Fuck you, Ben Franklin" and an improvised background line of "What the fuck is a bruin anyway?!" floating around in those movies too.