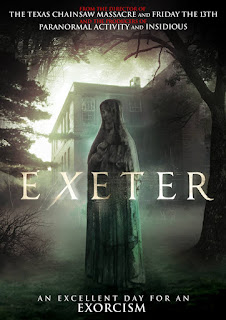 An excellent day for an exorcism... except an exorcism here won't really help and they don't know how to do one properly anyway.  They try.  Believe me, they try to do an exorcism.  It devolves into splashing holy water and saying "the power of Christ compels you!" pretty quick.  If they knew anything about doing a proper exorcism then they would know you need to make the demon or entity tell you its name.  This helps in gaining power over it... not that I'm speaking from experience or anything... Hey, look!  Another paragraph!

Shitty exorcism (which may be my new metal band name) aside, Exeter takes place in what used to be one of those horrible state hospitals for children living with various disabilities.  After countless human rights violations it was shut down and now they want to turn it into something that I forget.  It was church related, but only exists as a plot device as to why Patrick knew of the location since he was helping to fix it up.  What is meant to be a small group of friends turns into a huge party and suddenly Patrick's younger brother is showing signs of possession.  Then everyone is locked in.  It's on!

About 10 minutes in I thought this film was going to be a bore.  However, once the possession happens Exeter held my interest and some of the gore got me really excited.  Wait... that sounds wrong... fuck it.  NO WAIT!

In all seriousness, Exeter was great.  The story turns in ways I didn't expect and the twist at the ending caught me off guard.  Very rarely do I completely lose consciousness of an entire piece of the puzzle, but Exeter had so much going on it redirected my focus and made the finale that much stronger.  I do have two complaints though.  The first one the overuse of panther sound effects for the possessed, and the second is the misuse of the term "Wiccan" for what really should have been "Witchcraft."  Wiccan doesn't really fit what's going on with this film.

I give Exeter 3 statues of St. Bernard getting ready to choke slam someone out of 5: