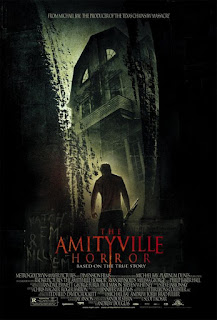 I don't mind remakes if they're true to the source material and don't go too off the rails.  However, a big part of the original movie was that George Lutz ran back in the house to get the dog, fell through the steps, almost into the hell portal, and the dog helped pull him up.  In this one, George fucking killed the dog about a third of the way into the movie.  Also, what the fuck was the deal with the huge push of John Ketchem in this one?

I'm getting ahead of myself here, but I've had an affinity for the Amityville Horror house.  Hell, I've been to the damn house!  Look at that picture!  That's me!  That's the house!  Although they did change the windows in the attic to try and keep people from doing what I am literally doing in this picture.  Oops. 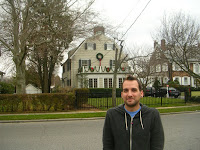 Me in front of a spooky house during spooky Christmas!

Going back to the 2005 remake of The Amityville Horror, this movie kept its foundation around the original story.  A man goes insane and kills his entire family.  He claims he was possessed and heard voices telling him to do it.  Jump ahead many years and the house is for sale, cheap.  Enter the Lutz family, who buy the house and move in.  After a series of frightening events they eventually leave the house one night, fleeing for their lives.  They claim to never return and leave all their crap.  We know of the story because they recorded audio tapes of their encounters in the house and sent them to an author that made the bestselling book of the same name.

While this movie had a lot of shirtless Ryan Reynolds to look at, the rest of it wasn't anything really interesting.  They seemed to add a story of the ghost of Jodie (the youngest from the murdered family) making friends with the girl because she was lonely?  The youngest daughter did claim to have an "imaginary" friend named Jodie in the real story, but this additional emotional attachment to the spirit was unnecessary for this film.  Add in the fact that they decided to have this "remote" house being used as a sanctuary that Rev. John Ketchem was using to torture Native Americans?  First off, John Ketchem was lightly mentioned in the book and really isn't related to any of this.  More than likely he is just there to add a spooky "devil worship/witchcraft" factor to the story.  Also, you see that house, and there's nothing remote about it.  There's an equally huge house built prior to it also in this picture!  That was a huge community!  Remote my fucking left nut!

I mention and complain about all of that because at one point George starts having visions of these torture rooms and then busts through a wall and finds them?  I don't even know.  I don't even fucking know here.  The moment George killed the dog, this movie went off the fucking rails in a bad way.  The acting was solid though.  That's what's really disappointing with this re-imagining of this film.