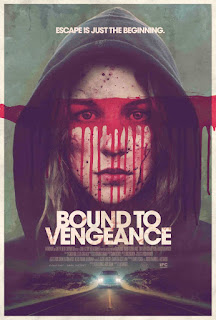 I don't know how to start this post, let alone talk about this film.  It's not as if I was floored by it.  Far from it.  If I write the basic plot on here then it sounds like an interesting concept.  The issue is that Bound to Vengeance doesn't execute it well.

Bound to Vengeance follows Eve, a woman that was kidnapped but she turned the tide on her captor and has the chance to escape.  While going through the house she's in she comes across photos of other girls that are kept around town.  She forces her captor to lead her to the other kidnapped women in an attempt to free them.

See?  That sounds like a decent plot.  It's not even an issue of acting or directing as everyone plays their part well and some of the shots are really well done.  The issue comes with the overall script and presentation.  I find myself not caring after the second of the freed girls is found.  It tries to out-twist itself and, rather than keeping my interest, it goes off the rails in that horrible train wreck form... a train that was carrying orphan babies. TRAIN BABIES!  TRABABIES!! 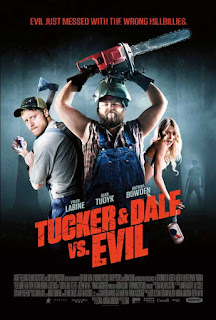 There are some films that don't get the attention or notoriety they really deserve.  Maybe it's the subject of two "hillbillies" being the actual heroes of the film, maybe it's the fact that this film pokes fun at a lot of the foundations of the slasher genre, or maybe it's just because it has an actor from Firefly on it and that only carries an association with the more nerdy circles of movie fans... regardless, T&DvE really doesn't seem to get the love it deserves.  That includes from the studio because they shelved it for three years before releasing it.

Tucker & Dale focuses around two groups of people.  There are our title characters (there to fix up their new "summer cabin") and the other is a group of college kids that blatantly break every horror rule ever laid to celluloid.  After one of the girls gets startled by Tucker and Dale she almost drowns but gets rescued by Dale.  Her friends see the end and misunderstand the situation and think Tucker and Dale are kidnapping their friend for some hillbilly horror scene.

That right there is the crux of this film.  Everything that really happens is because the college kids have these preconceived notions that the country folks in this West Virginia area must all be some sort of inbred rednecks.  This is only bolstered by the story that one of them tells the others about a massacre that happened in those woods in the past and was blamed on country folk.  We find this later to be untrue, but it's that mindset that leads to the actions of all of the college kids.  It does help though that it seems like the person that owned the cabin Tucker and Dale bought seems to have been Ed Gein... but that's something else entirely.

This film is a lot of fun.  The kills are gory but all believable accidents.  Tucker and Dale are both charismatic and fun leading characters and you dislike the college kids from the start... especially Chad.  Fuck Chad... Chad-ass fuckin' Chad!  There is also a great nod to Texas Chainsaw Massacre where Tucker accidentally hits a bee's nest while chainsawing and this leads to him running through the woods like Leatherface.  This makes much more sense than Leatherface just standing in the middle of the road swinging a chainsaw like an asshole.  Was it that he was getting attacked by a bee trap the girl set before jumping in the back of the truck?  Was it the dogs with the bees in their mouth that shoot bees at you when they bark?!  I'm digging deep for that Simpson's reference... 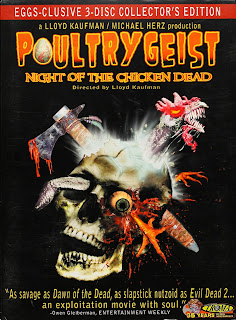 Happy Turkey Day!!  Nothing celebrates that more than a horror film about a fast food chicken restaurant!  In truth, my internal dialog of deciding what film I should review for Thanksgiving lasted all of five seconds.  It was pretty much me thinking of Poultrygeist, deciding to do Poultrygeist, and then five minutes later realizing I could do Thankskilling instead but I had already committed my body to Poultrygeist.

I've brought up Troma films at least 20 times on this blog.  If you're not familiar, or you're just joining us here at 30 Days of Plight, Troma is an independent film company mostly known for having made the Toxic Avenger films.  They also put out some non-Troma Studio films such as Cannibal the Musical (a college film done by Matt Stone and Trey Parker).  At its core, Troma carries a brand of low budget and offensive toilet humor that only a B-movie addict can love.

Truthfully, I forgot about how offensive this film really is at times.

The plot of Poultrygeist revolves around a fast food restaurant that is built upon what used to be a native burial ground and thus becomes cursed.  Our main character, Arby (it's all fast food chain names and puns) gets a job there after he runs into his girlfriend protesting the chain.  She had just left for college and suddenly become an overly political lesbian.  That's kind of par for a teenage male.  Do something dumb as an act of revenge in order to win love...

As the film rolls on, staff keep getting killed, patrons become chicken zombies, there are a lot of tits and gore, a gay character (Paco Bell) gets pulled into a meat grinder after jerking off into the meat and comparing it to an act of Che Guevara-esq rebellion, and we find out the protest and lead lesbian was doing it all as a ruse to promote the restaurant.  That's a fucking long sentence of random shit.

Oh, did I mention this is also a musical?  Because it is.  The songs are actually well written even though the lyrics are middle school boy humor.  In fact, as far as Troma films go, it seems like Lloyd Kaufman must've pulled some decent scratch together for this one.  The costumes, effects, even the title sequence showed some backing and thus a greater sense of effort.  This is not a slam on Troma's other films, it's just a big step up.

All in all, while I'm sure some of the things I brought up in this review have probably turned you off from ever watching it, Troma was my first and my continual personal motivation toward the idea that I could make a horror film.  It's not about big budget, big effects, big names, big bullshit... it's about making something fun and having fun.  I know from Lloyd's book that making a movie isn't easy, but these films make it seem attainable.

So I give Poultrygeist: Night of the Chicken Dead a solid 3 drumsticks out of 5: