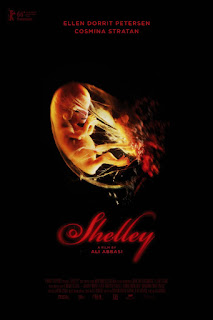 Sometimes in life we're given something, told it's one thing, but feel like it's something else.  For example, right now I'm eating some leftover Chinese food which is supposedly chicken, but I think this is pork.  This movie was listed under horror, had the subheading of thriller, but in reality it was neither of those... and also crap.

Shelley follows a Danish hippy couple where the wife is infertile.  They hire a maid to help around the home but eventually ask her to be a surrogate.  During the course of the pregnancy the surrogate experiences what she considers strange reactions to the fetus.  It causes her pain, strange aversions, sleepwalking, sickness, etc.  There is also an older hippy that does some reiki and pulls an angry dog out of the maid's head space.  Yeah, it was really as random as I made that seem.

The rest of the film isn't worth going into.  I will say that the baby doesn't really seem to be evil and I'm confused by the whole thing.  The pace of this movie was so slow that when you got a small piece of the plot you would forget it 15 minutes later when the next sliver of plot was introduced.  Then we're just stuck with hippies in a cabin for a long time.  I've been tempted to look up an in-depth plot analysis but I quickly realize that would serve no purpose as I'm not really invested in ever remembering this movie after I hit "publish."

In keeping with most of the films I've watched this cut, I give Shelley 0 stupid babies out of 5: