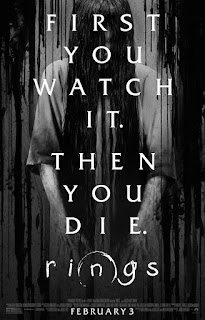 If this movie were a table then I would flip it in disgust.  Have you ever been in a movie theater where you could feel how bored everyone else was around you?  I just have and holy shit was it bad.  I've labeled this as a PSA because under no circumstances should you see this movie.  As a fan of the Ringu series, I implore you to avoid this.  I think that the warning on the poster is in regards to this film, not the stupid fucking video.

Typical ring story:  Watch the video, phone call, die in seven days.  Samara will give you a stupid death face.  We switch out flies for cicadas.  Find her body... again?  Apparently one of the Big Bang Theory guys is a college professor who gets students to watch the tape, then have another watch a copy so the curse gets passed on and the first person lives... repeat.  The dumb thing is there are no attempts at a real explanation as to why you can't just cycle back and forth between people aside from the tedium it would bring.  Holt (unfortunately not Steve Holt) is Julia's boyfriend who vanishes for a bit after watching the tape.  She goes to find him, then she watches the tape to save his life.  Shit goes down.

By shit going down, I mean it goes down the fucking toilet.  This movie front-loaded anything of interest and then drags you through the remainder.  Not only is it dragging you, but it is very obviously showing you things only for one of the characters to have the realization 20 minutes later.  There's a part where Julia looks up at a bell and I thought "Oh, the ring, something is below the ground there."  Fucking 20 minutes later Julia suddenly had this realization and I lost my shit.  It is just moments of that over and over.  The priest, the ring, the mark on the hand, etc. etc.

I have never left a movie theater as angry as I was after Rings.  I want my fucking money back.  I not only want my money back, but I want my fiancé to get his money back for the snacks we bought and whatever my gas money was to drive there.  I want money for emotional damage caused by how bad this film is.  I want the other people in the theater to get their money back.  In fact, I want them to pay the money back to people that went to see other films out of pure shame for this movie even being in a theater.  Fuck this noise!  Rings fucking sucks.  Put that on your blu-ray box as a quote you turds!

I give Rings negative 5 copies of Ringu.