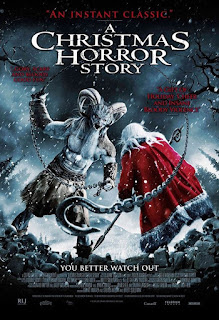 I'm not a fan of Christmas.  I haven't been since I was a teenager and as I aged into adulthood I liked it even less.  The only movie I readily acknowledge as a Christmas movie is Die Hard and fuck the rest.  So finding out I was about to watch A Christmas Horror Story meant that I was prepared to zone out over the next hour and a half.  However, as the song goes... you better watch out!

A Christmas Horror Story is an anthology of four different story lines that all share small intersections.  We have one where a zombie plague spreads through Santa's elves and Santa fucks some shit up with a sharpened staff.  Another involves three maybe high school or early college kids as they go to film in an old convent where some mysterious murders took place a year ago.  Number three has a nuclear family facing off against Krampus.  The final one is a boy and his parents going out to get a Christmas tree from way out in the boonies off of someone's property and the son suddenly goes missing.

That's all I'm giving you as far as this film because it was honestly fun to watch.  The story lines all interweave as far as what you're watching so it's less of a Tales from the Crypt style and more of a cohesive movie.  They do a great job of what I can only refer to as horror edging because they will build up to an exciting point in one story and back you off by switching to another and building again.  My greatest complaint though was that I only liked two of the four endings (Santa's story and the Krampus story).  This doesn't make the other two stories bad, just not what I would've enjoyed as a climax.

Other randomness from this film includes William Shatner as "Dangerous Dan" the radio DJ who fucking loves Christmas and Jesus.  He has a great line of "You know who saw that?  Jesus! And his dad!" when someone shows him a sign that says "FUCK CHRISTMAS." David Hayter was an executive producer.  You might know him as the voice of Solid Snake in the US versions of almost all of the Metal Gear Solid games (except for the last few where Kiefer Sutherland took over).  Finally, and this is more of a personal observation, the singing over the opening credits sounds like it was done by the same program they use for Hatsune Miku.  That's more of my nerdy shit though.

I give A Christmas Horror Story 4 copies of King Diamond's No Presents for Christmas out of 5: