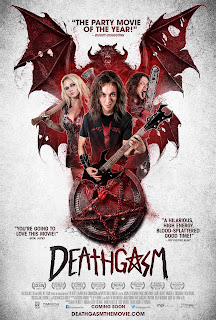 Can I just give this a 5 right now?  Seriously, this hit on all my favorite things as far as a horror-comedy.  It's fucking called Deathgasm for Lucifer's sake!

Take one part Evil Dead 2, one part John Dies at the End, and throw in every heavy metal album cover ever and you have Deathgasm.  After finding out there's an old metal musician in hiding in their town, Brodie and Zakk end up with a copy of "The Black Hymn."  Their shitty metal band (named Deathgasm) play the song and suddenly the town becomes possessed.

I haven't laughed out loud (on purpose) at a good horror-comedy in a while and this one had me rolling on the couch.  It's such a great combination of juvenile humor mixed with metal references, corpse paint, cheesy blood and gore, and even a Sub-Zero fatality at one point.  Also boobs... what's a metal movie without boobs?  Have you even seen Heavy Metal?