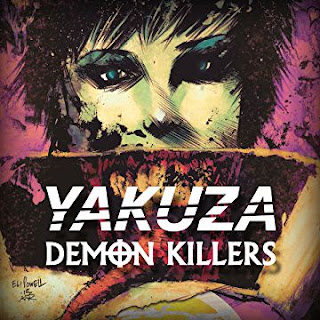 Keeping with the new format, Fridays are going to be a kind of grab-bag day for me to keep myself from getting too swamped with bad films.  Hence, Friday's Choice Cuts, where I going to cover something I like that's horror related.  So for our first entry in the FCCs I'm presenting the comic series Yakuza Demon Killers; written by Amit Chauhan, with the artist Eli Powell, and published by IDW Publishing.

Currently spanning four loose issues (with a hardback version of these on the way), Yakuza Demon Killers ties Eldritch horror with modern day Japan and throws in a sprinkle of Silent Hill-esq character design.  The art style reminds me of the earlier Walking Dead comics but more frantic.  Its sketchy moments add to action of the panels and helps to add a certain sense of "edge" reminiscent of the small publisher comics of the 90's.  Story wise, it's pretty solid.  If they never make a 5th issue then I wouldn't really be too torn up because I always like a good "the villain wins" reveal.  I know that's kind of a spoiler, but without the story you have no clue who I'm talking about anyway.

I bought all four issues at once solely based on the name, covers, and a quick flip through an issue.  I can say that I am definitely not disappointed with my purchase.  I recommend checking it out or at least waiting until the hard bound version comes out because I'm sure it'll have some extra stuff thrown in as well.