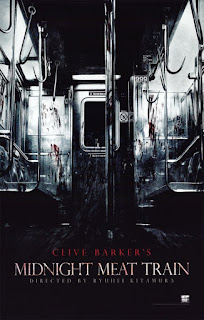 For years my mom kept talking up how good Midnight Meat Train was.  Previously I had watched about a half-hour of the film before falling asleep or doing something else.  You know, man stuff!  I find it fitting though that when I'm coming back in and really making a serious attempt at keeping up with this blog, the movie I would end up rolling would be this one.  I started this blog shortly after she passed away, partially out of our shared love of horror.  So this one is for you mom. *cue "Crossroads" by Bone Thugs n' Harmony*

Midnight Meat Train focuses around a photographer named Leon (Bradley Cooper).  After realizing a woman he photographed on the subway has disappeared he becomes obsessed with a series of missing person cases.  His obsession leads him to discover an underground cabal of murder in order to maintain a balance between the known and unknown world.

I think I might have made this movie sound way better than it actually is (sorry, mom).  Somehow a short story was adapted to an hour and forty minute movie (of course, Hellraiser was based on a short story too).  Mostly they did this by padding it with scenes of the train murders, which was probably smart.  Some of these kills were great and the CGI stuff of eyes popping out and arterial sprays made this much more interesting.  There were talks of Barker making this into a trilogy but, despite being a Clive Barker fan, I wouldn't watch this again, let alone two more films.  I've got man shit to do!

I give Midnight Meat Train 2 hotdog trains out of 5: