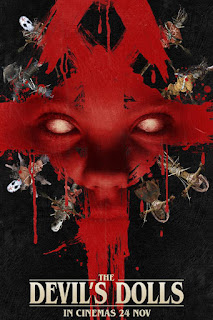 Netflix didn't even spell the name of this film right.  That's how little they cared about The Devil's Dolls.  When you have an image with the correct spelling for reference and you just completely ignore that to fuck right off and do your own thing, you really don't give a shit.  Kudos to taking that shit to an all new level, Netflix.

The Devil's Dolls are literally small dolls made out of coffin nails, string, and fabric.  After tracking down and shooting a serial killer, a police officer has them as evidence.  Like a true professional he just puts the box of them in the back of his car for his daughter to find.  She thinks that they are for making jewelry.

This child is not the brightest bulb in the bunch.  I have some coffin nails and they're heavy.  You wouldn't want to make a necklace out of dolls made from them.  She does though, and since they're imbued with the essence of Satan, the farts of a demon, or were up a donkey's ass, they have evil power which causes the person possessing them to snap and kill people and do sick graffiti in the blood.  The daughter has an episode while holding on to one and it's enough to get sympathy from those that see, so they end up buying the other necklaces.  Let this go to show that children are the tools of the devil, to work their child trickery, and make you get possessed by rejected Etsy arts n' crafts!

We find out that the daughter will most likely die from her exposure unless the dolls are collected and given to this film's "magical negro" character.  Never, in my entire life, have I seen someone take that trope so literally as they have a woman of color that is a straight up hoodoo/root worker trying to save the day with magick.  P.S.  the cause of this entire film... this woman right here.  She set this shit in motion by being a dumbass.  She does have a good fire-run into the swamp towards the end.  Speaking of which, I don't know where this film is set or I just didn't care.  I assume the South, probably Louisiana with the swamp and root worker and racism of that character.  Whatever.  It's on the fucking North Pole for all I care.

I give The Devil's Dolls 1 Ebay haunted doll listing out of 5: