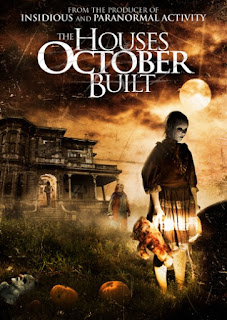 That poster looks like it's from one of those hidden object game pack CD-Roms you find at Wal-Mart for $10.  I know about these because my obsession with Paranormal State caused me to track down their game on one of those... and something like five Wal-Marts in a 30-mile radius.  DON'T JUDGE ME!  Instead, judge this "found footage" film, because that shit has been done to fucking death.

The Houses October Built crew consists of some 20-somethings that get the idea that they want to go on a road-trip to find an "extreme" haunted house.  This road trip is only six days and they pretty much stay in Texas until they catch wind of a place known as "Blue Skeleton."  Think of it as the speakeasy of haunted houses where you have to get a weird invite in a creepy way and then go somewhere to meet someone.  Along their voyage they stop at a few different actual haunted houses and, usually the guy with the beard, ends up doing something asshole-ish and pissing off the workers.

They get followed and creeped on by all kind of crazy haunted house workers until they are picked up by the skeleton crew.  Then they're buried alive after being fucked with in some creepy house in the swamp/woods.  Whatever.  Fuck 'em.

I had actually seen parts of this film before because my husband (P.S.  I got married before this cut started) watched it and I was probably sitting on my laptop while he did that.  It didn't keep my interest much then and this time it started okay before my interest waned again.  I also, for the life of me, don't know where in the hell they found an alley off Bourbon St.  I saw there were doors so I assume it was a private drive-way or something.  Seriously, the Quarter is dolphin's butthole tight with their blocks.

I give The Houses October Built 1 supposedly real haunted house out of 5: