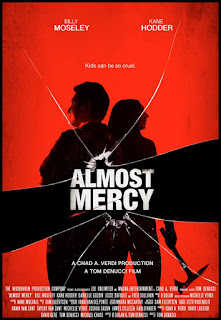 Welly welly well... here we are again.  Another six weeks, another 30 movies.  It seems like in the past few weeks that Netflix has made some updates to their system.  I've been getting my full selection of films and they also seem to have a much looser definition of what they're listing as "horror" now.  Fuckin'... rad...

Almost Mercy is one of those that toes the line of the "horror" heading.  This falls much more in the dark comedy/post-teen drama realm.  We're introduced to a duo of social outcasts, Emily and Jackson.  Emily also plays the role of our narrator for a majority of this film.  She fills in the gaps where needed and adds a relatively snarky commentary on things in the town.

Where Emily and Jackson live seems like any other small town USA.  It's a place where our duo just doesn't quite fit in.  Emily and Jackson bounce between general teen angst and being full blown sociopaths.  After the father of one of their fellow students commits a murder/suicide with his family we start to notice the cracks in the mask of this town.  The phrase "we're only as sick as our secrets" is the only way I can describe what eventually unravels with some of the towns folk.  What I thought was going to just lead to a school shooting plot (and almost does before Jackson chickens out) turns into something way crazier and way better.  This isn't to say that I would think a school shooting would be good.  The thought was a turn off, but the actual rampage that does happen in the film is awesome.

I could say a bunch more about Almost Mercy but you should probably check it out.  Bill Moseley is in it as the town pastor and fucking kills it as always.  The character of Emily is well done.  Nothing against Jackson, I liked him too, but Emily is the shining star here.  For once I get to start this blog out on a high note.  Fingers crossed for the next 29 films.