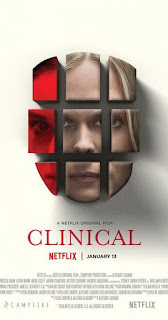 Netflix has entirely too much money.  Sometimes they put out great things, and sometimes they put out trash.  Sense 8, great.  Castlevania, great-levania.  However, having a shit ton of money burning a hole in your pocket means that you'll take risks.  Much as how I plan on going to the toy store later and I just got paid.  If I'm not careful I'll end up wasting some of that money on trash instead of putting it toward something good.  This was one of those times where the money was probably doled out by being drunk and making it rain only to realize later Netflix needed to pay rent or some shit.

Clinical is a mash-up of time jumps.  We start with a psychiatrist finding a female patient in her office with bloody hands and a shard of glass.  After attacking the psychiatrist the girl then cuts her own throat.  We find out later she survived.  How?  Well, this is the one thing I liked about this film and one of the weird things I picked up in random research.  When a person cuts their own throat they never complete the cut, you get about midway before the body enters shock and you pass out.  They stuck true to this and I applaud them for that.

Moving forward, after therapy of her own, our psychiatrist reopens her practice but avoids dealing with trauma cases because that's what her last patient was.  Eventually she gets a call from a man named Alex that says he was told she would be the only person to help him with his trauma.  She concedes and begins treating him.  He had a face transplant and his story was that there was a car accident he stopped to help and this lead to a mess of shit where his face got all kinds of jacked up.  That's a lie, he's actual the previous girl's father who was a fucking sick ass pervert and that was the girls trauma.  We'll leave it at that.

The girl begins showing up and you think it's either a ghost, flashbacks, or dream sequences but it ends up that she was released from the mental hospital she was kept in and just began fucking with the psychiatrist.  Lots of shit happens and it all leads to our protagonist pulling off the entire face transplant in one big ol' face pancake.  This makes no sense since it was a transplant from like a year ago and would have healed, but fuck science!  They spent it all on throat cutting research.

This review is way too long but there was a lot going on that was too confusing with establishing if it was past, present, or a dream.  I assumed that Alex was the girl's father early on and then they tipped their hand waaaay earlier than the reveal.  The acting and general cinematography were good but the directing and editing were kind of a wet fart.

I give Clinical 1 computer rendered clinic out of 5: