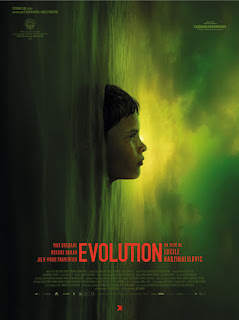 Evolution is a movie.  I watched it.  That pretty much sums up how I felt after I finished this film.  It wasn't as if the content left me confused or that there was too much to process, it was just a thing that exists in this world.  Much how you come to see newspaper headlines that you see and know that exists but it doesn't effect you.  It's like strangers on the sidewalk.  Perhaps they acknowledge each other but for the most part brush right past each other and continue on.  Some other metaphor goes here to make it a trilogy.

Evolution is actually a foreign film.  The dialogue, all in French, is minimal.  This film seems to rely more on visual story telling.  A boy is swimming in the ocean and sees a dead body among the coral.  This appears to be the early catalyst to let the boy know that things aren't as they seem.  Ignoring the fact that everyone there is either a weird pale androgynous Tilda Swinton woman or a young boy that has to take medicine (yeah, every single boy) we're never quite sure if this is set on Earth or even in the present.  We just get a lot of life and death imagery laced with the color red and star symbolism to accent key moments.

This film once again toes the line of horror.  It's really more of a sci-fi/thriller type deal with one straight up nightmare fuel scene.  I can't go into it unfortunately because it gives away a lot of this movie and truthfully, while it didn't impact me that much, I don't want to disuade someone else from seeing it.  This just wasn't what I was looking for at the time and that probably colored it that way for me.  I might rewatch it at some point if someone says they want to watch it and I'm there, but all in all it was just a film I watched.

I give Evolution 2 starfish out of 5: