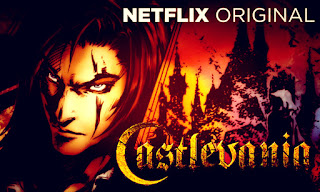 I've been a fan of Castlevania since I was a wee child.  In fact, from where I'm sitting right now, I can see my NES cartridges of Castlevania and Castlevania II, as well as my wall scroll of the box art of Castlevania hanging on my wall.  I've used this blog before to mention horror related video game things, but this time we get to talk about the animated series of Castlevania that Netflix has put out.

Spanning only four episodes (because they didn't want to take a risk on it and fail horribly), a majority of this "season" is mostly to establish plot and characters.  If you've ever played Castlevania III: Dracula's Curse for the NES then you're no stranger to most of the general things.  Trevor Belmont is your Belmont for this (although, I'm always partial to Simon), and along the way he picks up Sypha and the season ends with them acquiring Alucard to their party.  I don't think I've seen any signs of Grant Danasty yet, so they might just leave him out.

The setting is Wallachia, an area cursed by Dracula where, after returning from his travels, he finds the Church (capital C there) has burned his wife at the stake for witchcraft.  She was a woman of science and a healer but fear and superstition lead to her death.  After  giving the people one year to make their peace before the curse arrives, they instead ignore it with the thought the Church will protect them.  They're wrong and blood and gore ensue.  There were no tiny hunchbacks jumping around or floating Medusa heads...  I better see that shit!!

All in all, it's not 100% what I wanted, but it's still in the high 80%-ish range.  The writing is great thanks in part to Warren Ellis (whom I know for because of the Transmetropolitan comics).  It does a good job of bring the game into an action scenario.  Trevor uses a short sword, a whip, daggers, and at one points has holy water become a weapon.  The whip animation is awesome and there are parts where he does things like disarming someone by whipping off their finger or taking out their eye.  Which leads me to the next part, gore.  They seem to know the perfect ratio of having it look awesome but don't let it become overkill for shock's sake.

It's been picked up for a second season which is supposed to be twice as long so I'm looking forward to seeing where they're going with it.  As I mentioned earlier, four episodes of establishing why your characters get together was a long time to spend on that and it did leave me unfulfilled by the end of this season.

Plus... the only other thing we've ever really had was Simon Belmont on Captain N. *shudders*
Posted by J. Cimba at 2:09 PM