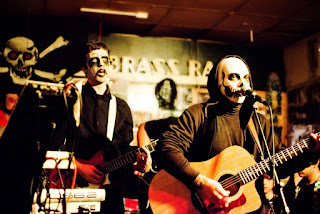 Let's skip straight past The Misfits as far as horror-punk goes.  We all know of them and how they're kind of a shadow of their former self.  Of course, so is "no-photos" Danzig right now.  Let's jump straight to a modern band with Harley Poe.

Sounding like a slightly more folk-punk version of The Violent Femmes, I was was introduced to them by chance back when I was spending a lot of time checking in books at the library I worked at.  At that time I was listening to a lot of Pandora or Spotify and this happened to just pop up on a random playlist.  Since then I've tracked down most of their albums except for one of their last releases which was put out by Fangoria and is a group of seven 7" all tied to one of the deadly sins.

The albums are a good mix of horror and humor.  With topics ranging from vampires, to werewolves, to hating their small town of Kokomo (not the place the Beach Boys song is about), it's fun sing-a-long type stuff.  Although I wouldn't recommend it in the car with your three-year-old.

Here's one of my favorite songs.  It's called Time of the Month and ties in a woman's cycle to be about her full-moon werewolf transformations as opposed to menstruation... although blood will flow.  MUAHAHAHAHAHAHAHA!  Sorry, I couldn't resist.