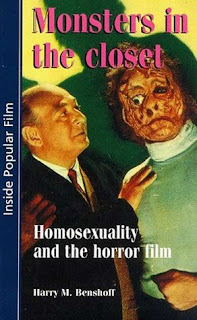 I've tried starting this post three or four times now.  It's not working.  So this, in turn, becomes the beginning.  Monsters in the Closet dives deep into celluloid history and lays bare its darker underbelly.  Starting with the early days of film and working its way to the 1990's.  This book dissects everything from the Universal classics, to the exploitative Hammer Films, and rounds out with the homoerotic ties of Clive Barker.

Monsters in the Closet made me take a deeper look into scenes I saw as nothing more than entertainment.  For example, in Frankenstein two men (the Doctor and Igor) work together as a couple to create life.  While the reanimating of dead tissue is a horror in and of itself, the idea of life coming from a non-heterosexual "couple" can play in on homophobic points of view.  Other moments of monsters wrestling with shirtless men in an attempt to break up a straight couple are rampant in those older films.

I learned a lot from this book too.  For instance, in the 30's there was a ban put on using the term homosexual or having an outright gay character in your film.  There were a lot of tongue-in-cheek references though.  It became almost a game to code characters actions and dialogue so that only those knowledgeable would be in on the joke.  Slip it under the censors that didn't know any better.  In fact, the homophobia that was so rampant in Hollywood over time was fascinating as well.

Just as a heads-up, this book does lean on the academic side.  It's not textbook dry but I could see this being on a required reading list for a course in film or human sexuality.  Each chapter ends with at least four pages of footnotes which add more info to what you've already digested.  I did find myself excited to hit those though because it let you have that expansion of the history or the author's thoughts.  He does a great job of showing how the art reflects the times, even if the times didn't want to face some things.
Posted by J. Cimba at 10:05 PM