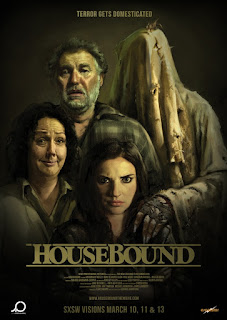 Hi kids!  Do you like twists?  Do you want more twists than an M. Night Shammalammadingdong movie?  Oh man do we have something special for you!  So special I'm using this .jpg from the movie to pretty much show how I felt for most of this film. 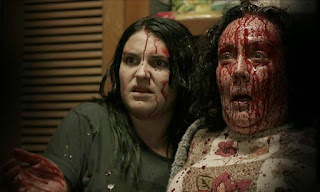 I'm more of the woman on the left than the bloody woman...

Housebound started out really slow.  I wasn't sure if this was meant to be a horror film or a dry British horror-comedy.  I think it was the second option here.  We start with a botched ATM robbery which leads to our main character being sentenced to 8-months house arrest at her mother's house.  At first it seems that the house is haunted.  We see a ghost arm, hear some weird stories, find out this place used to be a halfway house where a murder was committed, and experience tons of electrical issues.

It's not ghosts, but we find that out later.

It's assumed the weird neighbor committed the murder, and we waste time on that for a bit.  He's only good for plot info about Eugene.  Who is Eugene?  He's the guy that has lived in the walls of their house for like fucking ever!  But he wasn't the murderer...

The murderer ends up being the therapist that is there to help our girl rehabilitate or something during her house arrest.  He was on some sort of internship or fellowship at the halfway house and killed a girl after an incident.  His head eventually explodes though so it works out.

This movie started out at a snail's pace.  So much so that I invested in watching one of our cats play with his toy bat.  It was adorable and a much better watch for the first 15 minutes.  Otherwise though, when this film starts to peak it stays at that point for a while.  I may or may not watch this again if given the chance.  I'm not sure.  You do get to see a cheese grater used as an actual weapon, so that's a plus.

I give Housebound 2 ankle monitors out of 5: