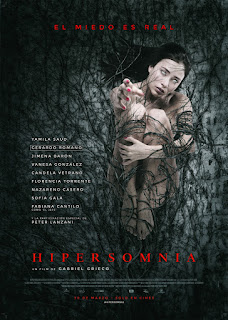 With all of that in mind, let's move on to Hypersomnia.  An Argentinian film that reminded me a lot of Black Swan, just without the whole dancer thing.  Our protagonist is an actress that begins to have issues with feeling as if she's slipping between two lives.  There is her regular life, and then there is the life of a woman being held and sex trafficked by some members of a criminal group.  A client, known only as The Gardener, is apparently an enforcer as well as a torturous asshole.  We do get a glimpse of him wearing a mask and apron.  The mask reminds me of a mix of Jason's potato sack mask, Scarecrow from Batman the Animated Series, and Decker's mask from Nightbreed.

For the most part we're left trying to guess which is the real world and which is a dream state, or are both real?  Spoilers: They're both real and she has a twin that she sometimes jumps into.  After putting the pieces together she tracks down the warehouse building where this shit is going down and she and her boyfriend attempt to liberate the girls.  The girls had a plan of their own and enact it at this time and begin to wreck shit.  The Gardener ends up being the one person they thought was their friend the whole time that just happens to have some form of multiple personality disorder.  They escape with only the loss of the actress' boyfriend who dies by The Gardener's hands.

Honestly, this film didn't keep my interest.  The use of The Gardener seemed like an unnecessary foil to the actual twins.  The jumping back and forth was done in a manner that felt a bit too chaotic in the editing.  This lack of smooth transitions really take away from any flow this movie could have acquired.  Also, the actress went through crazy conditions to do a play that seemed like it was going to be shit.

I want to give this a 0, but I'm going to give Hypersomnia 1 set of Siamese twins out of 5.  Just because the acting in it was pretty good: