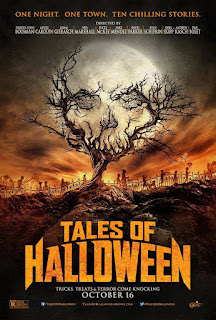 Ten short films in roughly 90 minutes is pretty ambitious. When I saw that I thought it might be a bit too ambitious but resigned to settle in and watch Tales of Halloween.  As soon as the opening credits kicked in my attention became focused on the screen.  Doing an awesome take on pop-up books to introduce the titles of each of the shorts that were included was such a fresh idea to me.  I became hooked.

I can't do much of a review here without ruining some of the shorts but here is the gist of it.  All of these take place in the same town on Halloween night.  You actually see some of the same characters pop up for brief moments in other shorts and it helps to cover the seams.  You know you're getting ten stories here but that overlap makes them all cohesive.  Each transitions into the other with only a minor form of a narrator by way of a woman doing a radio broadcast.  Luckily she is used sparingly and rather than being the glue holding it together she becomes more of a decorative attachment.

Out of the ten shorts I'd say that there were only two weak ones, but they're only weak in comparison to the others which were outstanding.  With a bar set that high, you're pulling a B+ while everything else is an A.  Think of it as one of those shitty grading curves where an A was moved up to a 92% and these two shorts have a 90%.  Tales of Halloween could honestly be my Baskin or my Beyond the Gates for this cut.

My favorite shorts on this are: The Night Billy Raised Hell, The Weak and the Wicked, Friday the 31st, and Ding Dong.

I give Tales of Halloween 5 spooky jack-o-lantern faces out of 5: