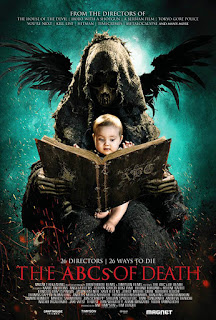 This isn't my first rodeo with The ABCs of Death.  In fact, this may be my third time through if I'm remembering correctly.  I wish I could do this with a fresh set of eyes, but it is what it is and so I'll review based on this watch.

If you're unfamiliar with The ABCs of Death (or its sequel The ABCs of Death 2), it's an anthology of short films where 26 different directors from around the world are each given a letter of the alphabet.  From there they must pick a word that begins with that letter and make a short film pertaining to that word and death.  Any format is acceptable so long as they stay within those requirements.  At the end of each short the word is revealed to the viewer.

This is why the first watch of either of these films makes them the best.  When we initially watched The ABCs of Death it was spent trying to guess what the word was before the short ended.  On this viewing I remembered some of the themes ahead of time so a few of them lost that excitement.

Overall though, a majority of these short films are pretty great. While there are a few so-so ones, these films are so short that you're not weighed down before you have something new altogether.  The main killer here ends up being the two-hour plus running time, but you've gotta fit A-Z in there.


I give The ABCs of Death a solid 3 alphabet books out of 5 (for this watch through):