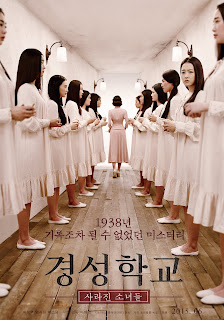 I really like foreign horror films.  Primarily because they're something different.  They give me something new to be scared of.  It's a whole new series of plots, monsters, ghosts, and superstitions that actually spark something inside.  I find myself looking up more info, digging deeper, going further than I do with most American horror films.  So what do I do when one suddenly pulls a very American horror plot?  Actually... I kind of liked it.

The Silenced takes place in an all-girls boarding school/sanitarium.  Our main character, Shizuko, arrives because she has contracted TB.  Over time we find out that there was another girl with the same name that just left/vanished one day.  The girls seem like typical school girls but some have weird freak-out moments.  It's as if they've become possessed.  There are some more traditional Asian horror moments that come into play as well: hands reaching out where there's nobody, girls with long black hair being pulled into impossible spaces, etc.  Shizuko begins to change as well.

I want to write more but I know if I cover any more of the plot then I'll spoil this movie.  Most of the time I don't care if I do, but that's on crap, and I enjoyed watching The Silenced.  It's a slower paced film than what most people may be used to but when it picks up it picks the fuck up.  I spent time actively trying to piece together things rather than having it all figured out from the start.  I also like that the filmmakers use the symbolism of breaking glass so well.  It represents everything from  moments of frailty, to a shift in a person or moment, or even someone's breaking point.  At first it seems tedious until you have that realization of "oh, there is purpose to this."

I give The Silenced a solid 3 cheesy Mazel Tov images out of 5: