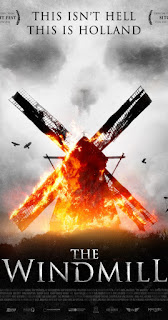 "This isn't Hell, this is Holland" is an actual quote in this movie, but I'll explain this later.  Every so often you get stuck with a really slow slog of a film just to have a three second moment make up for it.  A great example of that is in the film The Rite.  Anthony Hopkins plays a priest that is becoming possessed (if I'm remembering it right, it's been a while).  There's a scene where he is standing and looking at a body of water and there's a small girl next to him.  The girl asks if he'll bless her doll and then Anthony Hopkins just fucking backhands that kid and the scene is pretty much done.  There's also that moment in Hot Fuzz where Simon Pegg goes back to the town and is ready for a fight and one of the first things he does is dropkick an old woman.  Hot Fuzz isn't a slog, but that scene and the previous scene always make me laugh my ass off.  The Windmill gave me one of those moments where the movie has like two minutes left and a fucking Hellraiser hook just shoots out and straight into the middle of a woman's face and almost passed out laughing.  It looked good but it was so unexpected and hilarious.

I wish I could end the review right there.  Actually, if you just watch the last five minutes of this then that would be a five-star moment and review.  Unfortunately for me, the Windmill was a really good plot set in the dumbest of concepts.  A tour bus leaves Amsterdam with a group of what we learn are individuals with heavy sins.  The only exception to this is a teenage boy that is also a hemophiliac and has the most unnecessary character detail in this film.

They get stuck at a spooky windmill where a huge Jason-esq (circa Part 2) slasher begins killing them by making them relive their sin prior to death.  The only person to face and escape him is the Japanese man that felt legitimate remorse for his actions.  He also survives to explain our plot.  The mill is a gateway to hell that is guarded by a miller that made a deal with the devil at one point.  After the town murdered him, the devil was so fond of the miller that the devil let him walk the earth at that windmill to collect the souls of the damned.  Now that shit sounds fucking rad!  Everything except for the windmill/miller part could have been put somewhere else with another occupation and been way more exciting... but it wasn't.

The remainders think that burning down the windmill will end everything but it doesn't.  You can't fuck with the devil.  He rebuilt that shit instantly.  He's the fucking devil!  Although I assume the innocent kid died.  We didn't really get closure on him.  For all I know he's running naked through the wilderness of Amsterdam like some sort of streaking and bleeding Don Quixote.

I really wish this film would've been put somewhere else.  The plot concept was strong at its core but the execution was just a big fat shrug.  Maybe it's based on some sort of actual superstition and that's why they kept with it.   That limited it to be more of a colloquial concept as opposed letting it have a worldly grasp though.  Whatever.  The sinful actions were at least interesting and the deaths were gory.  I think that the face hook is the only thing that helped The Windmill by the end.