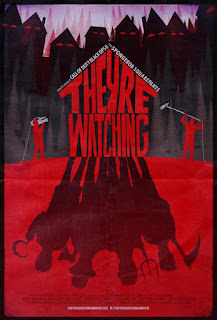 I was on board with They're Watching at the start.  Really, I was.  But then we got to the last 15 minutes and it was like they realized they had a bunch of money left over and promptly use it for some rough CGI to shart all over the ending.  So much CGI.  Borderline SyFy CGI.

They're Watching takes place in a random Eastern Europe village where a rich white woman and her European husband buy this absolute trash cottage.  It is part of a home-fix-up show where the filming crew comes back some time later to film the progress that was made on the house.  Since this is the case the entire film is done from the POV of each of the film crew cameras.

I think that's a good point to step away from the plot here in case anyone reading this wants to watch it.  I will say that up until the terrible CGI kicks in, I was relatively engaged.  It isn't hard to follow the threads left out while viewing this, but, for as much as I complain about this style of horror movie,  They're Watching did it well.  Just that fucking CGI... god fucking damnit!

I give They're Watching 2.5 flipped houses out of 5: