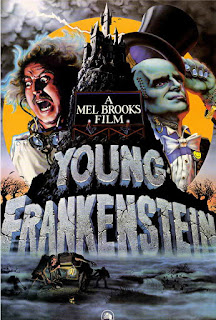 It has been ages since I've seen this film.  I think that this was the second Mel Brooks film I was introduced to (the first being Spaceballs because I was like nine or ten and rented it after some kids talking about it in elementary school).  It's always weird to go back to something as an adult and pick up on the humor you were too young to understand  It's not like this movie has a ton of it, but I did miss out on what there was when I was 12.

Young Frankenstein is a horror-comedy where the great-nephew (I think) of Frankenstein returns to his ancestor's castle and, despite his own aversion to being connected to his family's past work, creates a new monster.  Hi-jinx ensue during the entire movie.  That's the overall plot.

I'm don't want to ruin any of this film's jokes.  If you've ever seen a Mel Brooks film then you are familiar with they type of humor this has.  It is done in black & white like the classic Universal movies and stars Gene Wilder in one of his best comedic roles.  If you haven't seen this, you're missing out.  Unless you hate comedies or fun...