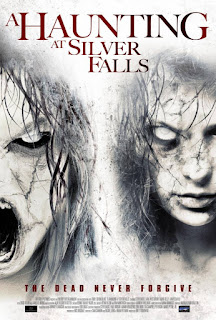 I feel like I'm watching the same movie over and over during this Cut.  What is the appeal of teenage girls either being possessed or being the person that sees a ghost?  Then why do you spend a bunch of time trying to make it seem that those around them think they're having a mental issue?  I feel like the horror genre needs to put an unspoken ban on this plot base to make people do actual work and come up with something new and creative.  While I'm complaining here, can we also get rid of the big twist ending at in the last ten minutes of the film?  It's not good.  We all liked the reveal in the Sixth Sense, but since then it's been downhill, even for Mr. M. Night Shamballahdragon.

A Haunting at Silver Falls focuses around a girl that moves from L.A. to South Dakota after her father's death.  She moves in with her aunt and her aunt's boyfriend/husband/sub (I'm not sure).  After finding a ring in the woods she begins to see ghost girls.  Our first real experience with the ghosts is some sort of weird Enter Sandman scene where the ghost tries to take the ring off the girls finger and then eats all her Ferrero Rochers.  Seriously.  Ghosts don't need to be on a fuckin' diet.

We come to learn that these girls were murdered by their dad, but that's not the truth and there are three rings that when put together the truth is discovered.  I would much rather Captain Planet comes out.  That's the only reference I can think of with rings, aside from maybe Mandarin which is less interesting that Captain Planet.

This movie was just recycled crap.  Boring recycled crap.  The ghost girls looked good if you want a zombie version of possessed Regan from the Exorcist.  The acting was okay.  The character development was all a bag of floppy dicks though.  I hated everyone in this movie.  The dorky guy that is kind of her boyfriend is an asshole, the "cool" guy is an asshole, all the adults are assholes, our main girl is just annoying.  If I could do ADR for the DVD release of this film I would make it so every time someone opened their mouths a fart noise would come out.  Then I'd market it as the comedy of the year and sell it for the same age group as that shitty Indian horror from was from last Cut.

enter sandman but the ghost eats all the ferro roches
Posted by J. Cimba at 11:35 AM