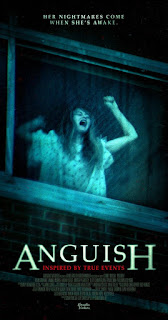 Here is a list of things I did in the course of watching this film:

1) went to my car to get out upholstery cleaner from the trunk
2) spot cleaned the couch (from rust from the pull out bed part... you perv)
3) cleaned the living room
4) made some mac n' cheese
5) questioned my life choices in regards to what lead me to "watch" this film

Anguish is not a horror film.  It falls under a heavy psychological thriller heading with about five minutes of forced horror.  Our story starts with a teenage girl being a teenager and getting hit and killed by a pick-up for her shitty angst.  Another teenage girl begins to have weird episodes of seeing things or having supernatural occurrences.  It's initially chalked up to mental illness until a priest visits and begins to assume it's possession.  We end up finding out it's the spirit of death-by-angst and then there are some awkward moments with the mothers of the teenage girls while our living girl is possessed by the dead girl.  Shoehorn in a brief moment where our living girl is briefly possessed by something else because, why not?  Then I think the living girl gets her spirit back and the movie just ends with some boyfriend making out and whatever.

Even when I was in the room and facing the TV I wasn't into this film.  It was boring and much like a lot of the films I've been watching, slow as fuck.  The fact that this wasn't a real "horror" film probably hurt it more in regards to my attention span.  I'm going to blame the script here because while I roll the plot over in my mind I think its foundation holds promise.  The execution however became the executioner for this film and instead of heads rolling it was my eyes at how listless this movie made me.

I give Anguish 0 copies of Teen Angst out of 5: