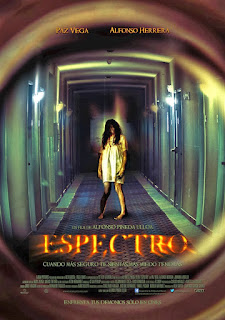 Instead of an intro here I'm giving more of a trigger warning.  If you are uncomfortable with scenes of sexual assault/rape then avoid this film.  I'm not saying I'm okay with it but the film pretty much started with a really long and uncomfortable scene of this.  In truth, this film could have skipped it or done it differently to still have this tiny part of the plot happen.

Demon Inside is a Mexican film where our main character is a psychic/tarot card reader that focuses on helping people with her gifts.  After a violent sexual assault, her trauma leads to her being admitted to a facility.  Upon her release she is afraid to leave her home.  It doesn't help that her neighbor is an insane and possibly murderous woman.  We also find out that the man that attacked her was cleared of the charges.

Our psychic begins to see visions of a bloody woman in her home.  After some research she discovers that there was a murder in her building and assumes the person is reaching out for help.  In truth, they're visions of her own future, but you don't find this out until the end.

For most of this film I felt lost.  It wasn't just the subtitles (which were sub-par and occasionally word-for-word translations as opposed to contextual translations), but it was also the story telling.  The whole film was meant to build up a bunch of info that only gets sewn together at our main character's realization that the woman she had been seeing was herself.  They're lucky that I made it that far without falling asleep.

I give Demon Inside 1 bad looking Illustrator demon out of 5: