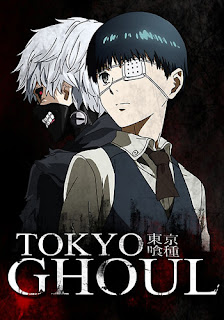 This is probably fitting as I had just recently attended Mechacon (the local anime convention here in New Orleans).  Although I didn't do cosplay for it this year, I was thinking of doing Faust from the Guilty Gear fighter series but... maybe next year.  Anyway, back to the matter at hand.

I became aware of Tokyo Ghoul in ways that no 36 year old probably should: Tumblr and Hot Topic.  The combination of these had kept me away from it until I decided to finally take a chance and watch it.  The story itself revolves around Ken Kaneki, a boy that happens to have an encounter with a very dangerous Ghoul which attempts to devour him.  In the process though the Ghoul is killed by an outside force and Ken is on the verge of death.  He ends up surviving because the doctor transplants parts from the Ghoul into his body.

At this point you're probably thinking "da' fuck is a Ghoul?"  A Ghoul is a creature that looks human but must live by eating flesh.  They can regenerate, have a greater speed and strength than humans, and also contain a special "organ" known as a Kagune.  This organ can manifest and be used to attack or defend.  It can also be severed and used as a weapon against Ghouls, as the special "dove" forces do this to fight on the side of humans.

I thought this was going to be much more of an action/horror anime but it really ends up being a drama/horror one.  Most of it revolves around Keneki's internal struggle with trying to maintain his humanity despite suddenly being a Ghoul.  Unlike vampirism, one isn't turned into a Ghoul, they are their own species.  He just happens to be a rare case once he was given Ghoul parts, the main one being his left eye which shifts to black and red when he gives himself over to his darker half.

There are political tones as well.  Similar to the Professor X vs. Magneto views that exist in the X-Men comics (fuck those movies though...), there are Ghouls that wish to wipe out the human threat and those that wish to just exist among them.  In a way, and this could just be me reading into this too much, it has a tone of the civil rights struggle in it.  Maybe I'm applying the X-Men analogy too much though...

This is the first "season" or series as the follow up is Tokyo Ghoul √A which picks up at the end of Tokyo Ghoul.
Posted by J. Cimba at 3:33 PM