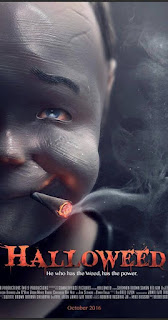 I can't believe I watched this film.  It's a mess.  A weirdly coherent mess.

Halloweed has way too much going on for a upper-low-budget movie with weed and dick humor.  A man and his stepbrother (Simon Rex) move to the town of Mooseheart after their their dad/step-dad (Tom Sizemore) is executed for his serial killing spree.  Looking for a new start, the stepbrother starts selling weed for Danny Trejo, then forms his own crew with Jason Mews and Andy Milonakis. There's a mayoral race with Jim O'Heir as the standing mayor.  Then there is a the candy corn killer who is a man in a baby mask and huge baby PJs.

All I can keep thinking is "how?"  How did this come about?  Are most of these people friends or were they really bored and looking for something to do?  Then they call it Halloweed and the weed jokes are minimum.  This film just doesn't know what it wants to be.  It starts out like a Troma film, then just gets into a shittier Pineapple Express type thing, and then suddenly remembered this was going to be a horror film.  Fuck this mess.  Make that into a cross stitch and hang it on your wall.

I give Halloweed 0 bootleg Pokemon weed humor images out of 5: