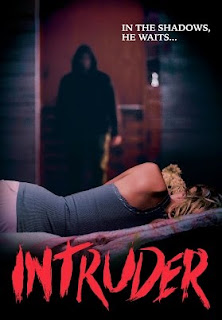 T.S. Elliot wrote "This is the way the world ends / Not with a bang but a whimper."  I find this quote fitting since today's film is number 30 and rounds out our 5th Cut.  Rather than going out with a bang we were stuck with another crawl and failed (at least to me) attempt at suspense.  But I'm getting ahead of myself...

Intruder is set in Portland, Oregon and takes place mostly in a woman's apartment.  She's a cellist for the Portland Philharmonic Orchestra.  This is a plot point that really only exists so she can interact with Moby who has a role in this film as a huge fucking asshole.  He's still Moby despite playing someone else and him using the word "fuck" or any variation of just feels awkward.  Our leading woman spends most of her time oblivious to the fact that there is someone in her apartment almost constantly.  The fact that she's watching a friend's cat and the cat does nothing to give this dude away is also really frustrating because it seems like the kind of cat that would want all the cuddles from everyone.  Also, as far as I know, the cat lives past the ending.  The true hero of the film!

This is meant to be an attempt at psychological horror.  I found myself assuming that the man was not real and that this was probably something to do with her.  Every male character we meet is suspect except for her boyfriend because he gets killed and left under the bed.  Which, as a follow up thought, for a stab wound there was no blood, and he was under there for longer than a day which means that the body should have evacuated the bowels and the internal gases should have caused bloating.  On top of that, there was no marbling of the skin or pooling of the blood in the veins due to gravity and no heart function to pump the blood.  That corpse was still as pretty as when he got stabbed.  Fuck that!

I get what they wanted to do, but it didn't have the suspense.  She never truly suspected so why even bother with a build up if you're not going to heighten tension through the characters on screen?  Seriously, even her smelling a fart from the guy and looking around would've been more interesting than just her going about with blinders on.

I give Intruder 1 picture of the band Masked Intruder out of 5: