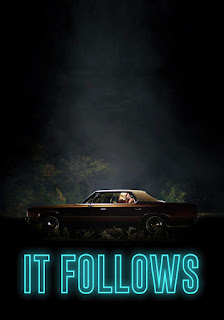 I think this movie is how people picture the Millennial dream.  These kids/young adults live at home, they don't go to school or work, they have cars, they obviously have unprotected sex, and not one of them ate at a terrible chain restaurant like TGIFridays or Applebee's.  Honestly, if any of those stupid "Millennials are destroying..." articles are really true I hope it's that one.  Fuck your shitty cheese sticks!

I've complained a bunch this Cut about slow films but It Follows has to be the slowest yet.  The moral of this tale is that if you have sex (I'm actually not sure if this follows genital warts rules, where it can be passed even with a condom, or syphilis rules where a condom will stop it) then you might contract something that makes creepy people in white slowly walk at you.  Most of this movie is the main girl freaking out at stuff the others can't see.  Then she passes it on to one guy and he gives it to a prostitute.

There is a distinct lack of logic or continuity with parts of this film.  The greatest one for me is the cast on the main girl's arm.  She has literally broken her arm or wrist just a few days prior, then swims in a nasty lake with it, and then goes in a pool with it.  After she is out of the pool she crawls with it and shows no pain despite her wrist bending normally in the soggy cast.  It's like they added a prop but told her it's just for decoration and to forget about it.  There's also the issue of the people that you see once you're infected actually existing in this physical realm.  There are interactions with it.  So are these things just everywhere?  Where the hell is that explanation?!  Lastly, there are rented fucking VHS tapes in one shot!  It's goddamn 2014 (for this film)!  Where in the flying fuck did you rent VHS from and why are you renting VHS?!

This movie was terrible.  It was a lot of pretty camera shots that got stuck with a mumbling cast and poor editing.  Seriously, an hour and forty minutes of this shit?  Fuck that!  You could cut out at least a half hour of bullshit here and do better.

I give It Follows 0 pieces of avocado toast out of 5: