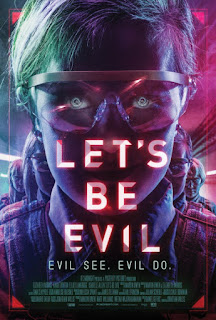 Finally, a film that doesn't involve a teenage girl being possessed!  Also, a film that uses modern technology to create a somewhat believable plot.  If only the execution would have been a bit better...

Let's Be Evil follows Jenny (which I only remember because her name was on the screen so much).  She's been selected as one of three people to enter this augmented reality (AR) environment to help watch a collection of genius children.  The entire environment is seen and interacted with mostly through the AR aside from the general self care tasks.  The children are studying intense complex things and don't interact except through info relayed to the proxy of the AR, A.R.I.E.L.  Jenny does find one girl though that will speak and interact with her for brief periods of time.

One evening, the group of three are woken up to be told the children are missing. Over that night the children begin to take over the facility.  What then happens is breakdown of not only the AR but of what Jenny's perceived reality is as well.  The lines of each cross and blur to where the viewer isn't sure who is real and who isn't.

I liked the concept of this.  I think it takes a newer technology and really goes somewhere with it.  The problem I have is that it doesn't take it far enough, or maybe it just takes too long to get us where it's taking us.  This did make me think of a more modern take on Children of the Corn (Children of the Pr0n?), where instead of a harvest deity their "god" is computers.  It might be worth a watch if you're bored and want something different, but it can also just serve as background noise while you're doing other things.